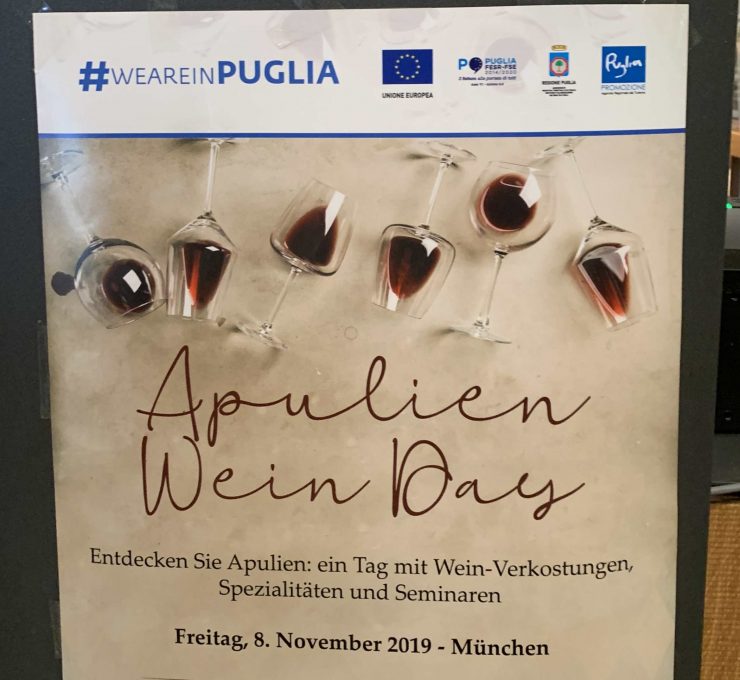 Apulien Wine day in Munich, participating by chance to an apulian aperitive

As all the Italians lost in this teutonic land, I regularly require Italian food. Therefore, in order to forage for some peninsular products, I need to pay regular visit to Eataly, the temple of the italic enogastronomic culture in Munich. Last week, while lost between the shelves and the fridges and considering wether to buy mozzarella or instead to opt for a burrata, I noticed a poster indicating an upcoming Apulien Wine Day. Before the summer I had a really interesting wine tasting with primitivo.Therefore I thought that it would have been great to go there and have a chat with some producers.
On Friday, immediately after work, I descended into the Cellar of Eataly expecting to see the advertised 31 producers. As soon as I arrived downstairs my enthusiasm got shattered. No sight of any producers, but  an exposition of wine bottles  manned by some sommeliers. I personally do not like this set up since it pushes the people to try one wine after the other without  much interaction with the person serving the wine: this usually leads to ethically intoxicating results. 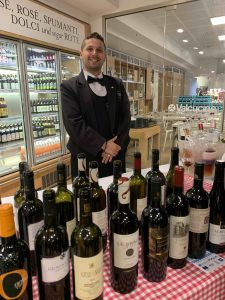 However, since I was expecting some friends, I decided to stay, and I can tell it was a really good decision. By interacting with the sommeliers I discovered that they were flown in to Munich directly from Apulia just for the event. This meant that they had a really strong connection with the terroir and could convey the passion for the land when presenting the wines. Heartened from this discovery I went ahead with Nero di Troia. I just tried two of them, but they did not convince me, so I moved to the next station with negroamaro. Here I started to really experience the south wines of Apulia. The Orfeo Negroamaro from Cantie Paolo Leo was an classical negroamaro with its red berries notes. The Negroamaro ‘Le Braci’ Severino Garofano 2011, however, was really a revelation with its softness in taste and longness in the mouth which mixed spices and fruity plums notes. 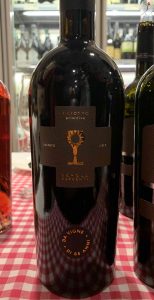 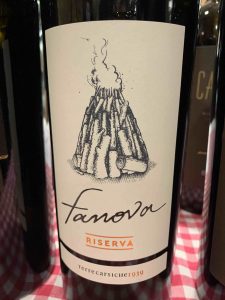 Next, my friends pushed me to move on to the primitivo serving area. Here after a pleasant and informative chat with the sommelier I landed on the Papale linea Oro Primitivo di Manduria 2015. The wine impressed me with its reasonable sweet richness and notes of cocoa. Thereafter I discovered the clear taste of the Favova Riserva Primitivo doc di Gioia el Colle 2015, a wine which derives from grapes from karst terrains and provides an intense bouquet of red fruits. Then I saw the Schola Sarmenti – Primitivo 2015 Diciotto Salento. I tried this wine at the mentioned wine tasting and I was not really convinced, so I decided to give it a second chance. The wine is good, too good, too rich, too alcoholic, too intense, in short too much primitivo. Anything more than half a glass after a meal would be overwhelming for the senses. If you are in extreme wines this is definitely a wine to try. 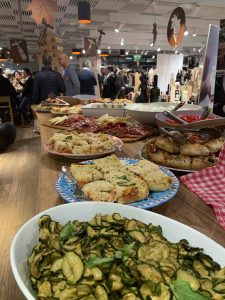 At this point I noticed that several cooks were starting to set on top of a nearby table, an incredible selection of products from Apulia. As the time was passing more and more food was brought in. Cheese, tomatoes, sliced meat, burrate, taralli, cooked vegetables and other mouthwatering food all locally prepared by Eataly. In other words a real apulian feast was been set in from of my eyes. An “aperitivo pugliese”, as the organisers defined it, based on products of Apulien which perfectly matched several of the primitivo wines that I sampled while nibbling (I was so concentrated in the food that I lost track of what I had in the glass). It is really amazing to see how a wine perfectly pairs the the food of its surroundings. 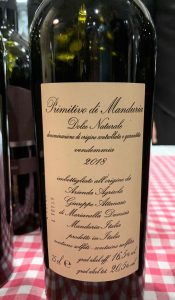 After having sampled at all the different foods, just before going home, some ladies told me to try the best wine of the whole event, the Primitivo di Manduria Dolce Naturale 2018 di Giuseppe Attanasio. As I sipped I was hit by a mixture of sweet red berries with strong spirit notes: in other words liquidised cherry jam with alcohol. I can imagine why the ladies loved this deep sweet drink. I am not sure which could be a good food paring for this wine,  but a slice a bread with some butter would be a reasonable guess from my side.